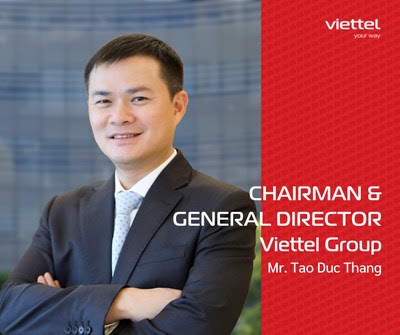 Being the youngest to hold Viettel’s top position, Mr. Tao Duc Thang leads Viettel as Vietnam’s largest corporation in industry, technology, and telecommunications with approximately 50 thousand employees. The group has investments in 10 countries on three continents.

Under previous leaderships, Viettel popularized telecommunications service in Vietnam and other developing countries; expanded into new industries including digital services, cyber security, manufacturing…; brought Vietnam up to pace with the world’s technological advancement; pioneering and leading the creation of the digital society.

At the handover ceremony in Hanoi on February 8th, 2022, Mr. Tao Duc Thang underlines his commitment to fortifying Viettel’s pioneering and leading spirit, the market leader position in Vietnam, and the group’s strategies.

Mr. Tao Duc Thang said: “I am aware of the responsibility as Chairman and General Director of Viettel Group. Together with my colleagues, we will do our best to create the sustainable and long-term development of Viettel and countries where Viettel is present”.

Having managed Viettel Network in several terms, Mr. Tao Duc Thang had a crucial role in constructing Viettel’s telecommunications network, which serves tens of millions of customers and as the foundation for the booms of mobile and broadband services in Vietnam.

At Viettel Global, Mr. Tao Duc Thang contributed to the globalization of Viettel Group. As a result, Viettel became the largest corporation in Vietnam to go global with ten international brands, among which are five market leaders.

Featuring Luxe Metal Bezel and Dimensional Dial TOKYO, Sept. 29, 2022 /PRNewswire/ — Casio Computer Co., Ltd. announced today the release of the latest addition to its G-SHOCK line of shock-resistant watches. The GM-S110 is a digital-analog combination timepiece with a mid-size design featuring a luxe metal bezel and a dimensional dial. The new watch […]