Indonesia Towards the Center of Global Sharia Economy

DUBAI, UAE, Nov. 8, 2022 /PRNewswire/ — PT Bank Syariah Indonesia Tbk (BSI) affirmed Indonesia’s commitment to become one of the centers of world Islamic finance, through the introduction of four programs to strengthen this ecosystem in Indonesia and abroad. 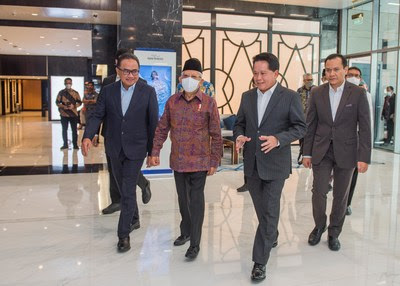 Minister of State-Owned Enterprises Erick Thohir has led the Ministries preparation of four featured programmes to form this ecosystem. First, developing the halal industry market within the country and abroad. The second one is developing the sharia financial industry. Third, friendly investment involving local entrepreneurs. And the fourth one, continuous growth of the sharia economy in rural areas.

Recognising Indonesian sharia economy potential, Minister Thohir expressed his desire for Indonesians not only to be consumers of imported halal goods but to be the producers. “We should be the producers and a global player. Yet that would be impossible if we do not have a strong sharia financial system,” said Thohir.

According to the indicator report from The State of Global Islamic Economy, Indonesia has continuously shown significant growth. In 2019, the country was one of the top 10 countries of the world’s sharia economy. In 2020, this rank was raised, placing Indonesia in the top five.

Thohir established the holding of the state’s sharia bank, Bank Syariah Indonesia (BSI). BSI is a result of the merger of 3 sharia banks namely BNI Syariah, BRI Syariah, and Bank Syariah Mandiri which was inaugurated on February 1, 2021. BSI is the largest Islamic bank and the 7th largest bank in Indonesia.

Vice President of the Republic of Indonesia Ma’ruf Amin said, BSI should be able to make Indonesia the center for the sharia industry and the world’s halal ecosystem. “Our hope is that BSI will not only take this role nationally, but also globally. Analogically, now Islamic banks are not just playing in a small pool, but are able to swim in the wide ocean,” said Ma’ruf, during a visit to the BSI representative office at Dubai, United Arab Emirates on November 4, 2022.

BSI President Director Hery Gunardi declared the bank’s commitment to fully support all initiatives to reinforce the ecosystem towards the goal of becoming the world’s sharia economy centre of gravity. BSI, he said, has persistently developed the country’s sharia financial ecosystem.

“Indonesia has big potential in halal industry,” Gunardi added. This is supported by the fact that more than 229 millions of its population are Muslim, which equals to 87.2% of the country’s total population. The halal food industry has the potential up to USD164,76 billion. Further potential can be found in clothing with USD20 billion, halal media USD9,52 billion, halal tourism USD10,48 billion, health industry USD4,76 billion, halal cosmetics and hajj and umrah USD3,81 billion. Other sharia businesses, such as investment, have potential around USD122,65 billion.

BSI has also started its business penetration in the global market. One of them is in the Middle East in line with cooperation with international conglomerates and start-ups in Dubai, United Arab Emirates, which also marks the expansion of the largest Islamic bank in Indonesia in the global arena. This step was an acceleration for BSI to be taken into account in the international community through increasing capabilities, competitiveness, and reputation. The presence of overseas business networks allows BSI to interact directly with important components of the global banking industry.

Gunardi hopes that BSI will be closer to global investors so that the company can contribute more in supporting the programs of the government of the Republic of Indonesia, both in funding infrastructure and development projects through the issuance of Global Sukuk as well as support for the development of national MSMEs.

Solid and healthy performance was also reflected by 11.53% asset growth. BSI also strived for cost efficiency, shown by better BOPO ratio of 74.02%. Until September 2022, there were already 4.44 million users of BSI Mobile, soaring 43% yearly. Based on customer profiles in BSI, as many as 97% have shifted to e-channel for banking activities. Cumulative transactions for BSI Mobile reached 187.20 million transactions.

Sustainable financing reached USD3,47 billion or 25.54% of total BSI financing. “Promoting sustainable financing is one of our commitments as part of our social and environmental responsibilities in various areas of this country as well as supporting the G20 Indonesia Presidency,” Gunardi added.