SHENZHEN, China, Jan. 18, 2023 /PRNewswire/ — On January 17, 2023, the six finalists of the Franz Edelman Competition were announced. Among them is Huawei Cloud, which stands out from the competition with its pioneering cloud resource scheduling technology and excellent market performance. The Franz Edelman Award is presented annually by the Institute for Operations Research and the Management Sciences (INFORMS) to recognize achievements in the management sciences. Huawei Cloud is the first cloud computing company to be shortlisted for scheduling technology in the past 50 years. 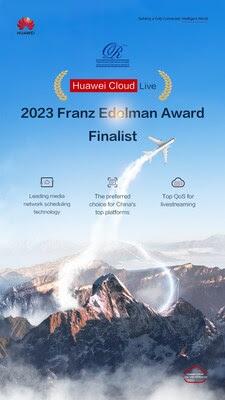 How to maximize cloud resource utilization without compromising service quality remains a critical but challenging issue for the cloud industry. Huawei Cloud’s industry-leading cloud resource scheduling technology provides a solution that increases media network resource utilization by over 30% with its innovative algorithms. The improved quality of service (QoS) has translated into ten-fold livestreaming business growth over the past two years.

Huawei Cloud assigned 39 scientists across 16 research centers both inside and outside of China to conduct research on cloud resource scheduling. Yuan Xiaoming, Chief Scientist of the Huawei Cloud Algorithm Innovation Lab, collaborated with experts in the livestreaming field to work on maximizing resource utilization and ensuring service quality under billing by 95th percentile bandwidth. Scientists developed algorithms for offline and online problems, respectively. During the problem-solving process, they encountered two difficulties:

First, due to the non-convex and non-smooth cost function in the mathematical model, minimizing the cost under billing by 95th percentile bandwidth is NP-hard. Second, Huawei Cloud Live involves more than 2,800 edge nodes. This means that there are 120 billion binary and continuous variables in the corresponding mathematical models.

In addition, it is difficult to develop an algorithm that is capable of providing an accurate scheduling scheme within milliseconds in real-world media network scheduling scenarios.

To accurately describe these problems, experts built a series of mathematical programming models, which provide a paradigm for further research. Experts also performed in-depth analysis on the structure and mathematical characteristics of the models. They split problems into subproblems, for which algorithms that combine easy problem-solving and implementation with high efficiency and stability were developed. Numerical experiment results show that these algorithms improve media network utilization by more than 30%, and also provide better QoS indicators such as higher stream pull success rate, shorter frame freezing in 100 seconds, and less time needed before playing the first frame.

Huawei Cloud also drives many other aspects of scheduling to new heights, such as through its industry-leading shortest-path MKSP algorithm and its collaboration with the Huawei Backbone Network (an industry-unique feature) and advanced cloud services. The scheduling-related research has yielded 30 patents and 6 research papers.

Huawei Cloud’s media network scheduling system, which resolves issues that have long plagued the industry, has been adopted by China’s top livestreaming platforms such as Douyu, Kuaishou, and Huya. Huawei Cloud developed a network traffic model and scheduling scheme, which accommodate traffic fluctuations, to ensure the smooth livestreaming of key events. With Huawei Cloud, more than 60 international sports events have been successfully broadcast live. Huawei Cloud’s livestreaming solution features industry-leading QoS, which includes 100% stream pull success rate, end-to-end latency of 2 to 3 seconds, latency of less than 800 milliseconds by Low Latency Live, and live video starting playback in seconds without frame freezing. The quantity of media resources provided by Huawei Cloud for major livestreaming platforms in China has grown 10 times in the past two years.

Adhering to the strategy of Everything as a Service, Huawei Cloud will harness its cutting-edge scheduling technology to create more value for industries such as energy, transportation, logistics, and retail.

XUZHOU, China, Jan. 28, 2023 /PRNewswire/ — A fusion of sci-fi adventure and heavy industry innovation, a flagship fleet of customized XCMG Machinery (“XCMG”, SHE:000425) equipment is featured in the China-made sci-fi blockbuster “The Wandering Earth II” directed by Frant Gwo, which opened in movie theaters on Chinese New Year’s Day, and will be released […]